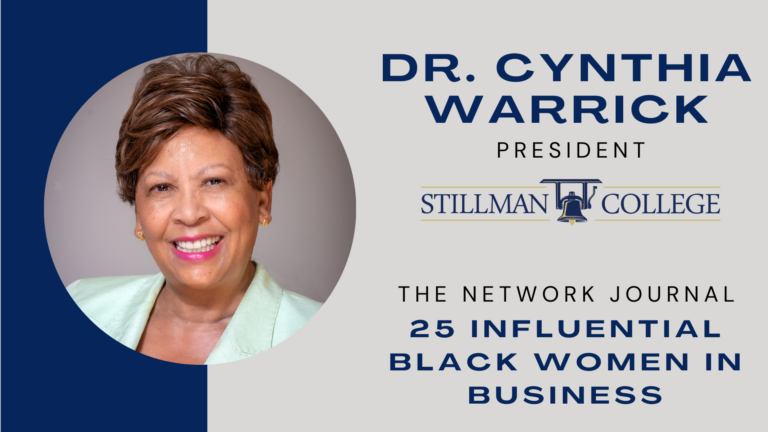 TUSCALOOSA, Ala. – The Network Journal has named Stillman College President Dr. Cynthia Warrick as one of its “25 Influential Black Women in Business” for 2021.

Warrick and the other women named to the list will be profiled in the Fall 2021 issue of The Network Journal and will be formally honored at the 23rd Annual 25 Black Women in Business awards ceremony on Thursday, Sept. 23. The event will be held virtually. Registration is free.

Warrick is Stillman’s seventh president and the first woman to lead the College. She began her tenure in January 2017, leading the college through a number of significant hurdles, such as successful Southern Association of Colleges and Schools Commission on Colleges re-accreditation for 10 years, without recommendations. Additionally, she was instrumental in gaining HBCU Capital Finance Loan forgiveness for 44 HBCUs, including over $400 million in debt forgiveness for Alabama’s HBCUs.

“I am honored to be recognized among this exceptional group of African American Women.  I applaud TNJ for consistently showcasing Black Girl Magic. This award was a pleasant surprise and greatly appreciated.”

This month she will also receive the National Black MBA Association H. Naylor Fitzhugh Award for her role in the HBCU Capital Finance program. In 2020, the HBCU Campaign Fund named Warrick one of the Ten Most Dominant HBCU Leaders.

Warrick holds a PhD in environmental science and policy from George Mason University, a master’s in public policy from the Georgia Institute of Technology, and a bachelor’s in pharmacy from Howard University.

As a biomedical scientist and pharmacist, she forges research and workforce development partnerships to grow the biomedical diversity pipeline between HBCUs, government agencies, and major research institutions, most recently between Stillman and Drexel University, and the Salk Institute.