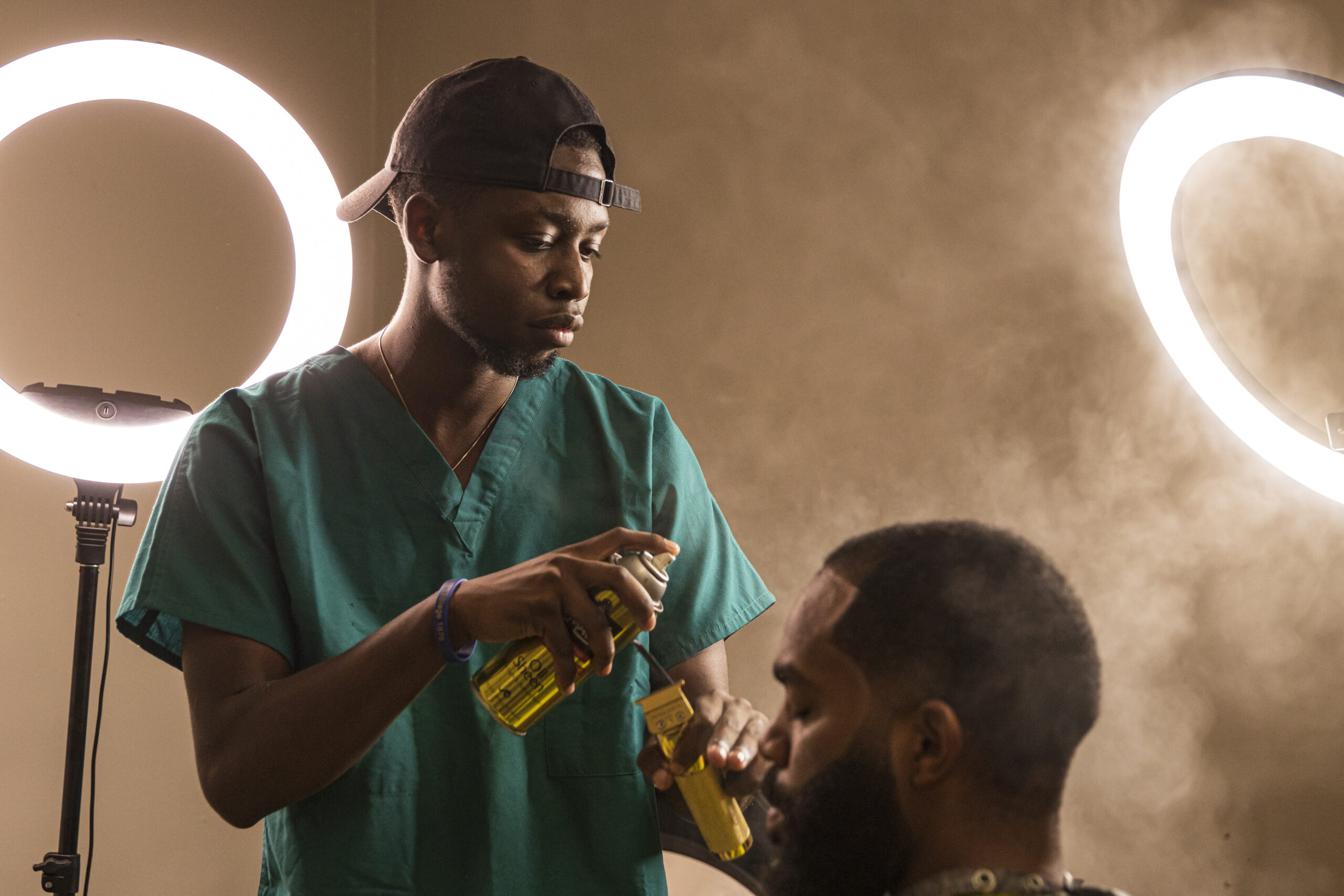 Too broad. Not attainable. Under-developed.

Judges’ feedback of Lorenza James III’s full-service barber franchise at the River Pitch competition two years ago was discouraging. James, then a freshman at Stillman College, had been building his “Trey the Barber” brand since December 2017, operating in shops and independently.

His aim changed as his client base grew, and his knowledge of the industry revealed gaps in services for African American customers. Washes, conditioning, cuts, non-surgical hair replacement – a full suite of services at shops in the $1.2 trillion industry of Black hair care was a no-brainer, and Tuscaloosa was the perfect launching pad, James thought.

Though his business plan was a bit more developed than his competitors at River Pitch, he failed to place. The critiques stung, he said, but the feedback helped sharpen his focus and strengthen his desire to get his enterprise established.

“Ultimately, the competition was to win [$1,000] and expand,” James said. “You get some advice, too, but hearing ‘no’ put me in a whole different mindset.”

James, now a senior at Stillman, has since opened 8Fifteen, LLC in downtown Tuscaloosa, a multi-room shop that’s undergoing renovations while serving clients. There, he cuts hair and sells skin and hair care products. Soon, he hopes to expand barber services and reach the ultimate goal of a full-service shop for African American customers.

James currently has 568 clients on his roster, with nearly 130 who are recurring each week or every other week.

“I also have two digital billboards in Tuscaloosa – one next to Cookout on 15th (Street) and one on Highway 69 – that have been up since the beginning of October,” he said. “I’ve gained about 25 new clients since then.”

With his enterprise trending positively, it may have seemed a curious decision to enter the 2021 River Pitch competition. James didn’t need the affirmation of panelists or peers. An injection of capital – a $1,000 prize for placing – would help, but he wasn’t hurting for support. For James, re-entering the competition on Nov. 9 was a chance to showcase the progress he’d made and present a more developed plan.

This time around, James would impress the judges and walk away the winner of Booth 10 and a $1,000 prize.

“I sat down and listened to every pitch before me,” James said. “I took note of what they were all doing: one idea was underdeveloped; one guy didn’t make eye contact with the judges. So, once I went, I felt confident. [Judges] were in awe that I had everything put together.”

James is a Tuscaloosa native and graduate of Paul W. Bryant High School. His heart was set on playing college basketball when he enrolled at the University of North Alabama. When he didn’t make the team, and he lost his motivation in the classroom.

James was put on academic suspension and would leave UNA.

“Stillman accepted my GPA and ACT score,” James said. “I got another chance.”

Though the opportunity to play basketball at Stillman didn’t work out either, James would experience college with his cousin and close friend, Caleb Watson, who died in April 2018. Watson’s memory is a cornerstone for the growth of 8Fifteen, James said.

“He was my best friend,” James said of Watson. “We got close when he hit 18 and I was about 15 or 16. We started to link up, play ball, play games together. It just worked.

“When he died, I decided to take business seriously and never let up.”

A network of support, education

Isaac McCoy, dean of the Stillman College School of Business, helps foster entrepreneurship at the college and works with students to re-tool their business plans, which are typically in early stages of conceptualization.

Shortly after McCoy’s tenure as dean began in 2018, he heard of James’ plans and decided to engage him. McCoy describes James as “charismatic” and someone who “exemplifies the spirit and the culture” of entrepreneurism.

“There are a number of people who have an idea and share it, but there’s a different level with someone who can activate it right now,” McCoy said. “Trey (James) was like, ‘I got something right now. I’m trying to make millions now.’ What’s unique was that his business was in conjunction with his academic pursuit, which wasn’t hindering his entrepreneurial spirit.”

McCoy lauds James as an “example” of entrepreneurship, not just for students, but for African Americans who aspire to launch businesses. McCoy said learning from failure and overcoming the perceived expectation of it is a critical benchmark for Black business success, and he’s proud of James for continually following through on his plans.

“Dean McCoy has poured into me about staying focused and continuing to grind,” James said.

James also credits Eddie Fraction, interim director of bands at Stillman, for being a “positive force” and motivator. The pair are collaborating on a mentorship project called “Teach, Inspire and Elevate” to help area youth stay in touch with the arts and teach them life skills.

“And I can’t forget my girlfriend, Tykenya (Reid), who always has my back and gives me a chance to breathe when things aren’t going good,” James said. “And my grandfather (Dr. Rev. Lorenza James), he always finds time to ask me questions about my business and life that gets me thinking and helps set up my tasks.”

James has taken an old-school approach to building his brand and strategizing for the future. For instance, in lieu of social media blitzes and paid promos with influencers, he’s relied mostly on traditional advertising methods and has devoted time to “things that make you great,” like reading books.

James said this strategy was encouraged by Smash tha Legend, a barber who started in a suite in Baton Rouge before expanding to Houston.

“I traveled to Houston to check on him and ask him questions about barbering,” James said. “But he was telling me about life.”

While some of James’ work lives on his social media accounts, he continues to rely on word-of-mouth marketing and authentic relationships with his clients. He took this same approach to research, visiting Great Clips and Sport Clips shops for ideas on how to model his operation.

“Honestly, a lot of Black guys look at me funny when I tell them about Great Clips and Sports Clips,” James said. “But those shops have full-service models on a small scale, but a lot of locations. So, I wanted to know what makes them work.”

James said he’s confident in his unique approach to business and his path to creating the “biggest Black franchise in cosmetology.” His next step: the grand opening of 8Fifteen in April.