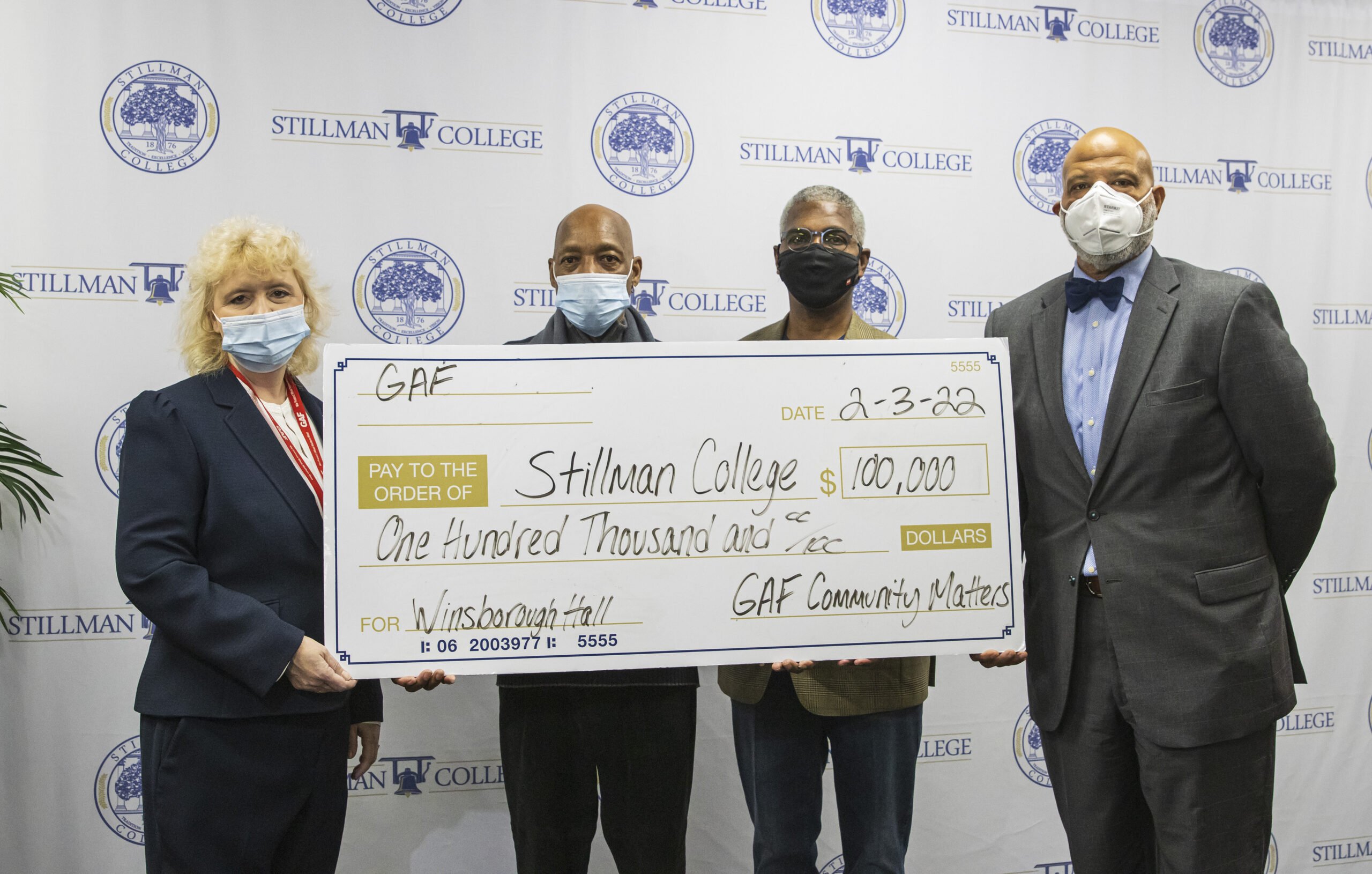 GAF, North America’s largest roofing and waterproofing manufacturer, has pledged $50,000 of materials and an additional $50,000 to cover installation costs to replace the roof of Winsborough Hall, the college announced Thursday.

The gift will aid an ambitious re-imagining of Winsborough, a former school for women and residence hall that the college aims to renovate and re-open as the Winsborough Living & Learning Center for active older adults. Stillman officials are currently seeking financial support for the Winsborough project.

“The roofing materials and cash gift from GAF to replace the roof on Winsborough Hall is truly a blessing,” said Dr. Cynthia Warrick, president of Stillman College. “Winsborough is Stillman’s oldest structure, built in 1922 by the Presbyterian Women. The GAF gift will help prevent additional structural damage but will also serve as non-federal matching funds for the Historic Preservation grant program applications we have submitted. This gift moves us another step forward to converting this former female dormitory into a ‘Living & Learning Center,’ with apartments for senior citizens who will benefit from interacting with students, faculty, and staff in our unique social, and cultural learning environment.”

Winsborough is listed on the National Register for Historic Sites. It has been vacant since the late 2000s and is awaiting much-needed renovation, but its legacy is buoyed by an incredible distinction: Winsborough’s opening began Stillman’s transition from a male ministry college to a fully co-educational institution of higher learning with broad education offerings. It was also a haven for students protesting segregation in Tuscaloosa with the Student Nonviolent Coordinating Committee (SNCC) in 1964. Vivian Malone Jones, the first African American to earn a degree at the University of Alabama, stayed at Winsborough while awaiting entry to UA.

Once the Winsborough Living & Learning Center is fully realized, its residents will be able to attend classes, social and cultural events, and eat and recreate with students. Stillman students from all majors will be actively engaged in academic projects with Winsborough residents.

Jeff Terry, vice president for corporate social responsibility and sustainability at GAF, said the company invests in community partnerships that have “long term” vision and “intentionality,” and he’s excited about the multi-faceted plan for Winsborough.

“Through the GAF Community Matters Social Impact Initiative, we are committed to helping support, strengthen and build our communities,” Terry said. “GAF is a dedicated committed corporate citizen in Tuscaloosa, Alabama, and we are excited to partner with Stillman in supporting Tuscaloosa.”

How GAF leadership became interested in supporting Winsborough happened at first sight. Last spring, members of the GAF team were in Tuscaloosa to support a Habitat for Humanity project when they drove by Stillman’s campus. They saw Winsborough Hall and the blue tarp that lined the roof and immediately became curious. Later that day, Terry met with Ellen Potts, director of Habitat for Humanity Tuscaloosa, and Katrina Baker, plant manager for GAF Tuscaloosa, and learned more about Winsborough’s needs.

“Ellen reached out to Dr. Warrick, then I connected with (Stillman executive vice president) Derrick Gilmore to learn what’s happening and how we could help,” Terry said. “We easily and quickly said, ‘whatever products Stillman needs, we’ll make it available to make Winsborough happen.’”

Helping renovate Winsborough Hall aligns with GAF’s mission to support West Tuscaloosa, where they’ve supported 35 roofing projects for Habitat for Humanity, with another 35 planned for 2022. Terry said the educational component of Elevate Tuscaloosa, a 30-year citywide development plan that launched in 2019, further motivated GAF to invest in Winsborough and its academic component.

GAF’s connection to Stillman College runs deep. At an event on Thursday to celebrate the donation, GAF Tuscaloosa plant manager Katrina Baker was on hand along with other GAF employees that share a rich history with Stillman College. Kelvin Thomas, one of GAF’s Vice Presidents in the Supply Chain, a Tuscaloosa native, earned his degree from Stillman College in 1995 and runs a family scholarship fund in honor of his mother and brother at the school. Thomas and Baker were also joined by team members from the GAF Tuscaloosa plant to celebrate the continued support of the historic college.

“It’s always great when we have corporate engagement and partners like GAF who are vested in the betterment of our communities,” Gilmore said. “GAF’s support of Winsborough is a welcomed opportunity for Stillman College.”