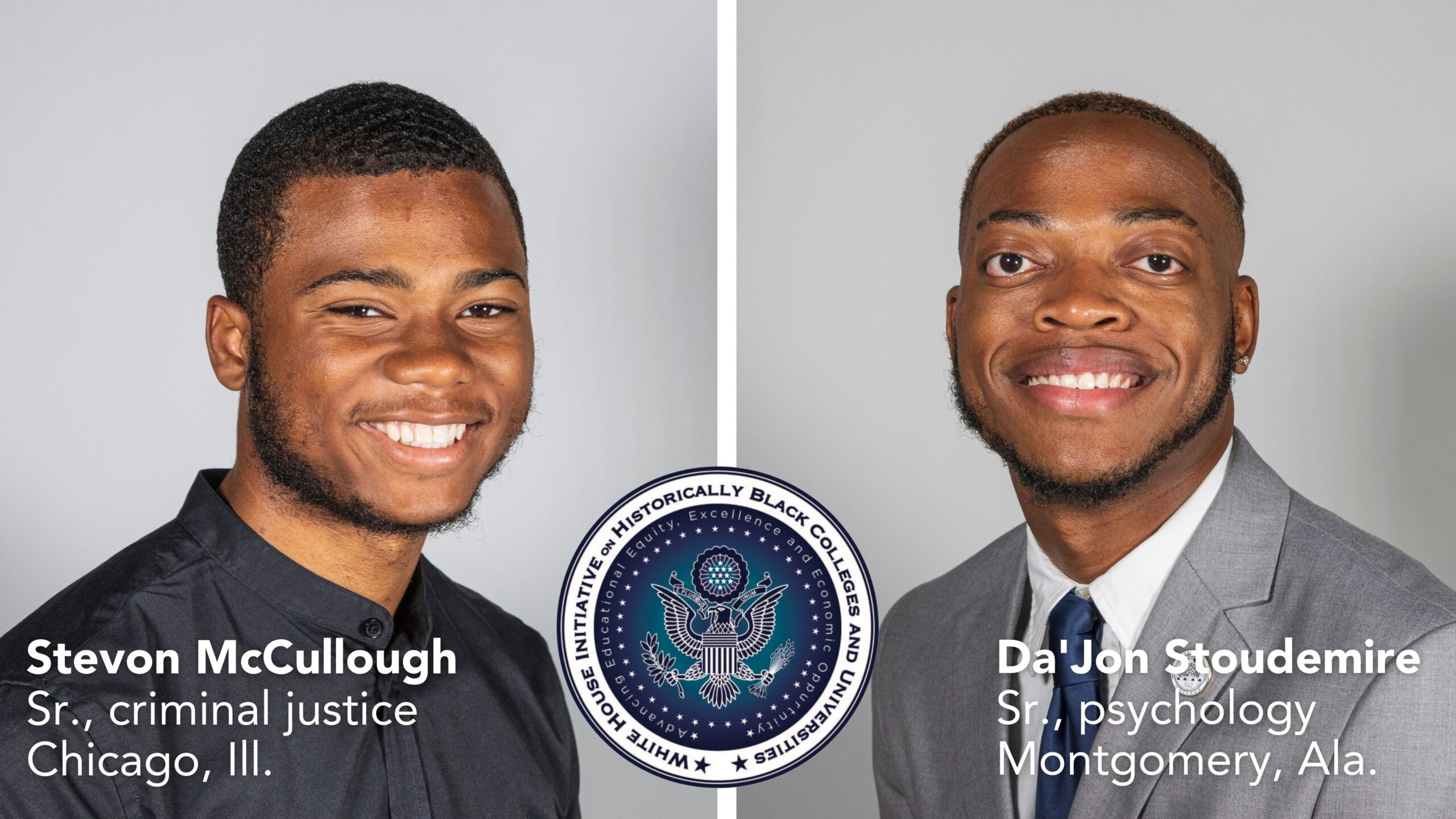 WASHINGTON, D.C. – Two Stillman College seniors have been named to the 2022 cohort of the White House HBCU Scholars Initiative.

McCullough and Stoudemire are two of just 86 HBCU students nationwide to be selected to this year’s cohort. Over the course of an academic school year, HBCU Scholars will serve as ambassadors of the White House Initiative on HBCUs. They will be offered training and cross-university networking opportunities. Scholars will also have an opportunity to work on issues specifically related to the HBCU community and participate in national and regional events with professionals from a wide range of disciplines.

“When I learned of my selection, I was relieved and happy to see my work got me somewhere,” McCullough said. “But my thought immediately after was, ‘don’t stop working since you moved an inch over.’”

McCullough is eager to use the HBCU Scholar platform to widen his professional network and strengthen his leadership skills for a potential career public service. Inspired by the legacy of Barack Obama, both in Chicago and as President of the United States, McCullough says he felt called to “defend the rich culture my people bring to this world” after Donald Trump was elected in 2016.

“One of the ultimate goals I had when I came to Stillman was to represent the college with [the HBCU Scholars] opportunity,” McCullough said. “[Black people] are so diverse in our culture and mindsets, and defending that – being the voice for HBCUs and my HBCU – is something I pride myself on.

“I want to follow in the footsteps of someone like [Obama], who raised the bar for leadership in our country.”

McCullough, a member of Stillman College’s Student Government Association, aims to leverage his HBCU Scholar resources to strengthen SGA’s “day to day” support of students into more holistic programming with an eye on “what’s down the road” for students, like graduate school and internships.

Within the scope of that agenda, McCullough wants to better understand the unique experiences of students at other small HBCUs in the South to not only improve his service at Stillman, but to help promote the HBCU experience and the successes of HBCU graduates.

“A lot of times, you have FAMU, Jackson State, Alabama State and others, but a lot of the small HBCUs aren’t looked at,” McCullough said. “But there are gems here that will grow to be presidents and leaders of companies, so putting us on the map is a big goal.”

Similarly, Stoudemire is keen to increase his professional network through the HBCU Scholars initiative. He said he’s thankful to be recognized for his academic performance and engagement across campus, and he’s eager to begin the professional development aspect of the program, particularly as he readies for graduate school.

“I look forward to connecting with other students in the cohort to understand their paths and experiences, how they compare to mine, and how they’re preparing for grad school,” Stoudemire said.

Stoudemire hopes to work as a clinical psychologist. He previously interned with The Arc of Tuscaloosa County, a rehabilitation center for individuals with developmental challenges, and recently began an internship with the University of Alabama at Birmingham School of Medicine “Blazer Brain” summer program in neuroscience research.

“I suffered with anxiety and depression a bit when I was younger, and I felt I didn’t have anyone to turn to,” Stoudemire said. “I researched it and learned there were professionals who could help with that, but I also realized there’s a lack of information about mental health education and services, especially to the Black community.

“Now, I want to be that person to help people with their mental health.”